When you start with beadworking, it is recommendable, that you try a small and an easy design first.

When you have more experience, you can try a more difficult pattern.

And when you have a lot of experience and make a lot of studies, you can even try to create a design, which is similar to an original one.

Sometimes it is helpful to go the same way in developing these skills as it evolved in history.

Before the beads were imported, porcupine quills were used to make ornaments which were rather simple, because this technique is quite difficult.

When the Native Americans got their first beads, they continued to make simple geometric designs like they used to do with quill before. After some time, they started to make new designs, which often reflect tribal differences.

When you have geometric designs, it is most likely from the Sioux or other Plains Nations, while floral designs are mostly found with the Woodland Tribes, e.g. the Ojibwa. 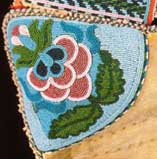 But you have to be very careful about "attaching tribal labels" to the designs. You could find for instance Crow beadwork with a Shoshone man, which he may have gotten through trading.

When a design is created, it might as well have a personal significance like seen in a vision quest and so on. But it is also possible, that the craftsperson just made the design up and it means nothing.

But there is one thing you should bear in mind: a beadwork design is in the Western way of thinking considered as personal property of the creator. If you find one that you would like to use for yourself, it is proper to ask for permission to borrow it. You should thank the craftsman with an unsolicited gift when your project is finished. If you would like to use a design that comes e.g. from the Sioux, but you have no idea who created it, you should at least study and learn about the people and so attempt to understand how that design was developed.